We are a nano sized brewery in the heart of Pinellas County, Florida specializing in small batch, hand crafted, artisanal ales and lagers. We focus on creativity; exploring beer styles and variations on them. We also brew styles that have long been thought lost, artfully recreating brews reminiscent of ages long ago.

We take pride in our direct interaction with craft beer enthusiasts.

What makes Rapp Brewing unique is that we brew a lot of different beers, rather than a lot of a few. This brewhouse model keeps everything we make truly small batch and promises something for everyone, whatever their taste may be. Using a smaller direct fire system also allows us to create flavors made through kettle caramelization, a key signature of many styles.

We utilize over 80 barrels of fermentation capacity spread over 50 fermentation vessels. This is what allows us to create such a wide variety of beers. Our in house labratory also maintains an extensive yeast bank of over 25 strains, which contributes to the distinctive tastes of our beers since easily 1/3 of a beer's flavor is created by the yeast!

Rapp Brewing Company was opened in 2012 by Gregory Rapp, the Brewmaster, and founder of local homebrewing club The Pinellas Urban Brewers (PUB) Guild. Meetings are at the brewery on the 2nd Saturday of every month.

In 2012 the craft beer industry was just emerging and the Tampa Bay area was home to only about 10 other breweries - today there are over 100! Our tasting room is an added draw for tourists and local beer lovers alike. Even before opening the doors Greg had already an enormous influence on the local craft brewing scene, winning many accolades in both local and national competitions while still in the PUB Guild.

Rapp Brewing is now part of the University of South Florida's Brewing Arts program and several of our brewers have gone on to open successful breweries of their own. We are privileged to have assisted in galvanizing the Tampa Bay area's reputation as a highly respected destination for craft beer lovers.

Greg Rapp started making wine decades ago. He later added sake and mead making. He brewed award-winning beers for over 15 years! Sadly, Greg lost his battle with cancer in 2019 but lives on through his creative brewing techniques and award-winning recipes with every batch we make.

Greg followed in the footsteps of European family brewing heritage. Around the turn of the 1900s his great grandfather Rudolph Rapp had owned and operated a brewery in Mohrungen, Germany. Some of those traditional beers are artfully recreated at our brewery today. 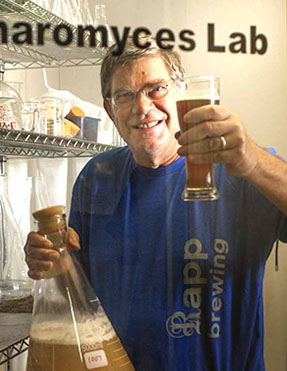